Age of a Domain Name as an SEO Factor

The age of a website or domain name age can be a valuable metric to gauge the quality of a website. We'll explain why the 'years in business' is a good indicator of quality and how search engines can use this metric as a ranking factor. We'll also explain the limitations of using domain age as a quality signal and provide insight regarding the use of a damping factor when including the site's age as a ranking factor. It's also important to distinguish the website's age and domain name's age as often times a new site might acquire an old domain or vice versa, an old site might acquire a new domain.

Why Age is an Important SEO Factor

Longevity May Indicate Success, Which May Imply Quality

The age of a domain name should be an important consideration when ranking a website. A website can be looked at as a business. Websites that want to optimize for search engines probably need visitors in order for them to stay in business. Many businesses continually rise and fall in a short amount of time. In fact, an overwhelming majority of businesses never last longer than 4 years. When a business makes it past the 4 year period, it tends to be much more likely to stick around for a significant amount of time. This information can lead us to merit more credibility to businesses that are at least 4 years of age. Businesses less than 4 years old have not gotten past the critical point that usually determines success or failure.

Of course this analogy of 'real world businesses' isn't entirely depicting of the internet world. Surely one can manage to support a website for years and years with minimal effort and finances. But in a way, this can spin the argument a bit in favor of ranking sites based on age. Many spam sites rely on short temporary bursts in rankings to achieve their goal. More often than not, these sites die young. They very rarely ever make it to be old age generally because they are exposed before they get too far.

It should be important to note that rewarding an older site is much different than analyzing the age of a particular page within that site which may experience temporary boosts in rankings in order for search engines to "test" its relevancy and quality early on.

Determining the Value of Age as a Quality Metric

Determining the value assigned to a particular site for any metric is a daunting task. In its simplest form, you could assign a value to each website that corresponds exactly to their domain name age. For example, "newsite.com" would earn 1 SEO Point while "oldsite.com" would earn 10 Seo Points. The problem is obvious though, the difference between a 6 year old site and a 1 year old site should not be the same as a 15 year old site and a 10 year old site. In other words, using a linear ranking model is not sufficient. Instead, using the graph below, we could attempt to extract a formula that determines the value of a site compared to others based on their longevity.

Using actual statistics from the U.S. Bureau of Labor, here is a graph depicting the failure rate of businesses within the first 4 years. The drop off from year to year seems to be an exponential model, so the SEO points awarded to a website should increase exponentially until it nearly plateaus. 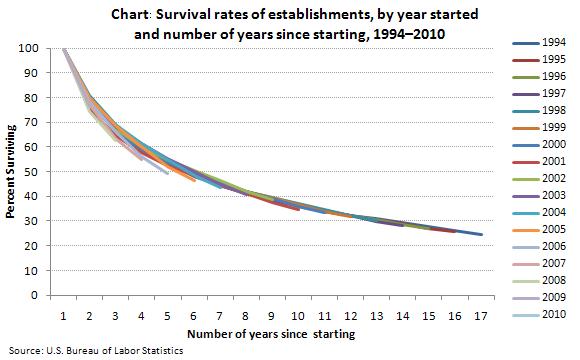 "Despite the early success of the "dot-coms" during the 1990s, the information industry had the lowest 2- and 4-year survival rates, 63 percent and 38 percent, respectively."

I suspect this is due to the ease of starting up new online businesses compared to a traditional brick and mortar. The chart clearly indicated that an overwhelming amount of businesses start and fail within a given time frame, ESPECIALLY dot-coms. With the appropriate data (which could not be found) we could premise that x% of websites are doomed to failure on their own merits before they turn into a quality resource for internet users. To determine just how to score websites based on their age, we'll use a combination of mathematical approaches:

The Formula to Calculate SEO Points Earned Due To Domain Age is as Follows:

First, by examining a trendline from the previous data we can abstract the following equation:

This represents the exponential decline in closings as a business matures. The coefficient of determination (R2) is nearly 1, or 0.9972 to be exact. This indicates that an actual sample of businesses will very closely follow this trend.

The value output by this equation will always be between 0 and 100 which is the consistent scale we like to use when grading websites. What the actual number given is, is the likelihood of the business actually still being in existence after X amount of years. A business that has outlived 90% of all other businesses would have to be about 11.9 years old.

In calculating the final value we should assign to a website based on age, we will take the value of this equation (x=years) subtracted from 100 so that old sites are higher on the scale and new sites are lower on the scale.

Problems with Age as a Factor

One of the biggest issues of using the age of a website/domain name is that a low quality website can last virtually forever because it can be so cheap to maintain. Using age to determine the quality of a physical business is a bit more reliable than doing so for a website, but the theory still holds true, generally. It is easy enough to discount an old website based on plenty of other factors so there is not too much to worry. Old, poor quality websites will get pushed down the rankings from low scores across other parameters while new, great quality sites will find their way to the top sooner than later.

Th fact that this parameter can not be faked is what makes it a very reliable metric. With that said, there is probably no way a webmaster can ensure they are perfectly optimized. Instead, focus on other things that are in your control and do not get discouraged because time is on your side, in the long run.